80 Free spins on a $1 deposit? Take my money! We have prepared an exclusive bonus in cooperation with Jackpot City casino to show Canadian players the full spectre of services and bonus offers of this celebrated Microgaming casino. JackpotCity has always been generous when welcome bonuses for new players are concerned. The casino players probably know about the deposit casino bonus that gives players up to $1,600 in bonus free cash for the first four deposits, where each gives a bonus up to $400.

However, this time we have a unique deposit bonus from JackpotCity Casino to offer. For a minimum deposit of $1, players will get not 50, not 60, but 80 free spins on the lauded progressive jackpot slot game Mega Moolah by Microgaming, also known as the millionaire maker among slot aficionados. We went through every aspect of the bonus to tell you all the details, such as:

Exclusive Sign Up Offer — Deposit $1 and Get 80 Free Spins

There aren’t too many online casinos out there that will give you some kind of a deposit bonus for a min deposit of just $1, right? Well, this unique Jackpot City Casino bonus for all new users from Canada has rocked the online gambling world.

Namely, all players who register an account for the first time and make a small deposit of just $1 will unlock 80 free spins on Mega Moolah Absolootly Mad slot game by Microgaming, which is one of the latest Mega Moolah slot games with incredible progressive jackpots often worth millions of dollars. The $1 minimum deposit gives you 80 chances to win, and if you happen to be one of the lucky winners, we are sure that your life will never be the same.

You can use a variety of payment methods, such as Visa, Mastercard, Interac, iDebit, InstaDebit, Paysafecard, and many other methods available to Canadians to make that $1 minimum deposit and trigger the bonus spins. Still, there are some important caveats to consider before opting for this $1 deposit bonus.

According to the bonus’ terms and conditions, before you can cash out the potential winnings generated from the free spins, you need to meet incredibly high wagering requirements set at 200x times.

You also need to know the value of the bonus spins you will get. So, the coin value in the Mega Moolah Absolootly Mad slot, or the ultimate value of each spin will be $0.25. These numbers put the total value of the 80 free spins bonus at $20. Not bad for just a $1 deposit. Bayton Ltd and its JackpotCity Casino have really outdone themselves, this time with a first deposit casino bonus that puts others welcome bonuses to shame and that helps you get a superior gaming experience on one of the best progressive slots on the market. 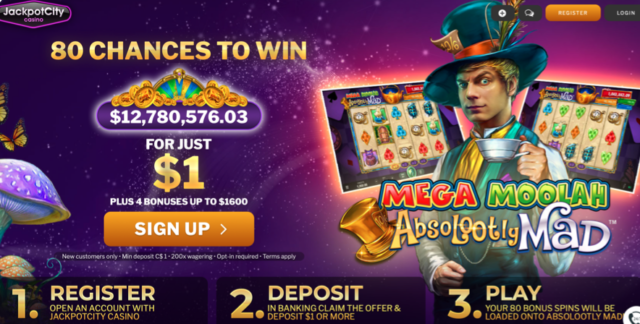 To get hold of the 80 free spins bonus, you need to follow a couple of simple steps. Don’t fret; we will guide you through the entire process. Check it out.

Why Mega Moolah Is a Great Game

Mega Moolah slot game is the world’s biggest and most famous progressive jackpot slot. In fact, there is a whole network of progressive slots under the Mega Moolah brand. In 2015, the slot broke the Guinness World Record for the biggest payout in history since a player from the UK won more than $18 million on a $0.25 spin. That classic safari-themed Mega Moolah was the first in a long line of successful franchise slots, among which is our star of the show: Mega Moolah Absolootly Mad.

This slot was developed by Triple Edge Studios exclusively for Microgaming. The game revolves around the Mad Hatter from Wonderland hosting a splendid jackpot tea party, and you are invited to attend and get a chance to win superb jackpots. The game features five reels with three rows of symbols and 243 ways to win.

It operates on a unique game mechanics called Rolling Reels, meaning that after each winning combo, the winning symbols will disappear and make way for new symbols that can, in turn, link several winning combinations. With each next win, the Multiplier Trail bonus feature will trigger and multiply your wins up to five times.

When you get three or more bonus symbols on the reels, you will activate the free spins bonus where eight free games will be awarded. With new bonus symbols, you can retrigger the spins and boost your chances of success.

There is another special feature that makes this game different from any other Mega Moolah. Players will notice that, whenever a Wild symbol lands on the reels, it will be collected in a teapot that is situated above the reels. While the progressive wheel bonus round happens randomly, your chances of that happening will be far greater with every new Wild symbol in the pot. Unfortunately, there isn’t a way to count the Wilds in the pot, but the more you have, the more likely you are to trigger the bonus round.

If you succeed in triggering the progressive wheel bonus round, a wheel of fortune will spin, and, depending on the symbol on the wheel it lands on, you will get the corresponding jackpot. There are Mini, Minor, Major, and Mega guaranteed jackpots, and you should know that the Mega one starts at $1 million.

The payout potential alone is enough to get players thinking about the Mega Moolah Absolootly Mad slot game, not to mention the 80 free spins bonus from Jackpot City Casino that comes with a min deposit of just $1.

What are the wagering requirements for Jackpot City $1 bonus?

The wagering requirements for the JackpotCity $1 deposit bonus are set at 200x. This requirement is undeniably hard to meet, but considering that the operator asks you to deposit $1 and get 80 spins in return, you can’t blame it for such a harsh requirement.

The best thing about this deposit $1 and get 80 spins Jackpot City bonus is that you can also claim the main welcome deposit bonus worth up to $1,600 in bonus money in total for the first, second, third, and fourth deposit you make.

What countries can I claim this bonus from?

JackpotCity is a global powerhouse that accepts players from multiple jurisdictions. If you are not coming from any of the restricted territories, you can claim the bonus. Note that all Canadian players are welcome to register and claim the bonus.

What games can I play with the 80 free spins?

The free spins are credited to Microgaming’s Mega Moolah Absolootly Mad slot game solely. No other game can be played with the 80 free spins.