The League kicked off at the start of the year. The official Overwatch League has been created and managed by the developer of the game: Blizzard Entertainment. On its inaugural night, the League attracted an average of 350,000 simultaneous viewers per game (more than 4 million during the entire first-day broadcast), followed the streams of the three inaugural matches.

For fans of eSports who came home or were present at the Blizzard Arena in Los Angeles, the impression was the same: SUCCESS. Impressive structure (all matches were played according to the schedule, the facilities include a commentary booth and crowd seats), clean transmission without crashes or failures, and even graphical news on the transmission to facilitate the follow-up of the dispute for those who are new to the game.

But behind all the opening hype of the Overwatch League, there are reasons to believe. Blizzard needs to make sure that one of the most played games in the world will go into the eSports scene to look at the top, and should not be disappointing any time soon.

History of the Overwatch League

Overwatch was released in May 2016. That means it is practically a baby in the gaming world. DOTA, Counter-Strike, League of Legends, StarCraft, are all games that, in addition to being older, already have a solidified history in eSports.

The big difference of the game of Blizzard is that the developer thought about this entry in the competitive scenario from the beginning of the project of the game. It explains a little of all the structure that the game itself (although still needs some adjustments) provides an impressive transmission and championship format.

To make it happen the way you always dreamed, Blizzard spared no money for you or anyone interested in the game development. For each of the 12 franchises participating in the Overwatch League, the developer charged no less than $ 20 million. The value initially scared the eSports market. But the planning presented justified all the investment and especially pleased the athletes, who will receive a minimum fixed salary of US $ 50 thousand every year.

It does not stop there. Each of the two regions (Europe and North America), which hold access tournaments during the preseason, rewards $ 100,000 for its champions. In the top tier league, the total prize pool (including mid-season and placement awards) is $ 3.5 million, with $ 1 million being the prize pool for the winning team.

Professionalism and Structure for Athletes

In addition to the high salary, Blizzard included in the franchise agreement other clauses that guarantee more comfort and safety to athletes. Each player’s contract is a minimum of one year in duration, with the possibility of renewal the following year, and also obliges teams to offer accommodation, health insurance, retirement, and other benefits based on results.

Blizzard’s planning also involves consumers in the league. In addition to the full range of tournament and team merchandise (that can be purchased physically or in-game), a developer partnership with Twitch (one of the companies licensed to stream matches) will allow viewers with in-game accounts Blizzard Battletag to receive some type of rewards. The rewards include tokens for the purchase of skins in the game. Although this bonus was not inaugurated in the first week of competition, it is clear that Blizzard’s interest in retaining the audience as soon as possible, either by taste or bonus.

The franchise model used by Blizzard is not a new one. Major American sporting events run almost all on the same model. The league opens up space for potential players interested in having a team, to buy a place in the tournament. From there they are obliged to follow all the rules and values ​​stipulated by the contracts. Companies such as Kraft Group and even big organizations from within the eSports scene like Cloud 9, became owners of the teams, without being able to enter their names in the teams. 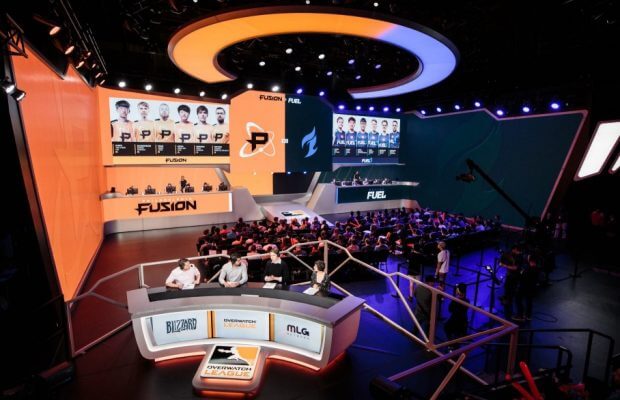 In this model, as in the NFL, NBA, and NHL, by franchise determination, franchises must represent cities. It is something completely new in the eSports scene, accustomed to teams following the flags of large organizations (Cloud 9, Sk Gaming, and Fnatic, for example) with teams of different modalities. With this, Blizzard seeks to facilitate the identification of fans with teams and their stars, as well as creating their own environment, with their own fans, products, transmission, and maintaining total control of eSports.

All this scenario built by Blizzard caught the attention of investors from the sports world. Some of the Overwatch League franchise owners also own franchises in American sports leagues. Here is a list of the renowned owners which have their teams in different domains:

Other investors in the sports world have invested in the large eSports organizations that have acquired franchises in the Overwatch League.

It is very common within the competitive games the existence of rankings, created from the performance of each player (whether professional, casual or amateur). If we compare football, for example, the way players are selected is much more “fair” and democratic. If you are skillful in the game and can rise in the rankings, it will probably catch the attention of the teams that are always following the evolution of the classification (updated in real time). Therefore, every player has an equal chance to win the attention of the scouts for merit, unlike the barriers that exist in the world of football.

In addition to showing the talent in the rankings, you can also participate in the Overwatch League from a selection made by the scouting system. Once selected through the rankings to play in the Open Division, Blizzard performs the Overwatch League Contenders, a tournament that predates the regular season and allows well-qualified players to set up a team to participate and show their value to the franchises.

This stage consists of four five-week stages, with three games on four days of the week (Wednesday to Saturday) and a ten-day break between each of the stages. Each team plays 40 simple matches during the season; 20 against teams in their division, and 20 out of their division.

The best team in each region guarantees an automatic berth in the Grand Finals, while the next four in the ranking play in the playoffs for the semi-finals. The prizes for the final stage are:

Overwatch is a single-person shooter (FPS) of a simple dispute between two teams by match. Each team consists of 6 members. Teams can face each other in 4 types of maps/objectives.

The team that is advancing forward to capture target points present on the map. The objective of the defending side is to stop the attack

The cargo is to be captured by the attacking team and needs to be taken to the destination.

This mode of Overwatch is played in the best of three format. Here each team needs to take 100% control of a point to achieve victory.

Teams are formed by a free choice of game heroes. Each character has a skill that determines their role in the game, but it is up to the players to define how many of each role and how they will use them during the game.

The functions are divided into: