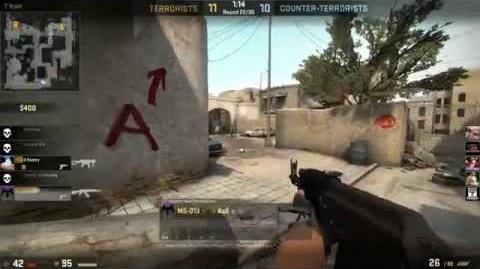 Counter-Strike: Global Offensive, also known as Csgo is a first-person shooter developed by Hidden Path Entertainment and Valve co. CS:GO has been around since late 2012. However, this is not the only Counter-Strike game ever made. Counter-Strike 1.6 and CS: Source were big hits in the gaming community once they were released, but they had one problem, that being old dated graphics.

What makes CS:GO so popular, is its competitiveness. That’s why CS:GO became an eSport. Not only did it become an eSport, CS:GO set a prime example for all the other games. There are a lot of various tournaments and leagues hosted not just by producers, but also third-party organizations decided to host and sponsor some of the most popular tournaments in Counter-Strike: Global Offensive. Furthermore, there are 2 main tournaments per year, they are most commonly known as Majors. These types of tournaments are able to attract over 1 million concurrent viewers, which is incredible. Prize pools are another must for every tournament. Let’s take FACEIT London MAJOR 2018 as an example, it had a whopping prize pool of $1.000,000.

Now that you are informed of how much money and popularity there is around Counter-Strike: Global Offensive, you will not have to think twice about playing it.

There are numerous teams and players striving to be the best. In order to achieve that, they have to communicate and use certain terminology. Here, you will be able to read about the most popular csgo terms.

FRAG: this is a common term not just in CS:GO, commonly used in every shooter game. It means to kill one person.

CALL: to inform your teammates about the positioning of your opponents. Each spot on the map has its own call-out, let’s take map Dust 2 as an example, you can make a call by saying “two guys long”. However, you can also call for someone’s hp, used utility, etc.

ENTRY KILL: this term is used as a terrorist, attacking side. If you or your teammate is able to kill a person defending either A or B site. You can simply make a call, “I’ve got an entry on A”.

A/B: short for bombsite A or B. Places of the map where the bomb has to be planted by Terrorists or defended by Counter-Terrorists.

C4: used by both sides in a game. Terrorists have to plant the bomb on one of the sites, and Counter-Terrorist has to either not allow bomb plant to happen, or to defuse it.

CARRY: a person who gets the important kills to help his team win a match. Usually, this person is also a top fragger for his team.

K/D RATIO: stands for kills per death ratio. Players tend to compete who will have the bigger K/D ratio at the end of the match.

T/CT: shorten for Terrorist and Counter-Terrorist.

LOW/LIT/LEGGED: Csgo terms used to inform your teammates that one of the enemies has been hit by you. Mainly used to keep information short, it’s easier to say “one is low on A”, then “one has been hit for 75 on A site”.

2K/3K/4K/ACE: this is shortened for 2/3/4 kills. Ace, on the other hand, is something even better. When one player, wipes out all 5 of the enemies, alongside all the wows and chants, we all call it an ace.

CSGO MATCH BETTING: signifies wagering real-life currency or items from the game on the outcome of specific CS:GO matches.

DINK: when a player gets shot in the helmet. The name comes from the sound heard when this happens in the game.

200 IQ: when someone manages to win a round for their team by pulling off a world-class move like killing a player with one shot using a Desert Eagle, for example.

BANANA: the famous corridor in the Inferno map that leads to bombsite B.

FLICK: a quick shot by which a player manages to kill another immediately after they appear in their line of view.

GH: it means good half, and players usually say it when the first half of a challenging match is over.

MOLLY: synonym to molotov. Can only be purchased by Terrorist side. This is basically, a homemade fire grenade, which can be used as an offensive tool, to flush someone out of the position, or as a defensive tool to buy time, while you’re waiting for the help to arrive. It deals damage per second to players standing in it, and it lasts for 8 seconds.

INCIN: shorten of incendiary grenade. You can only buy it on the Counter-Terrorist side. It has the same effects as a molly above.

FLASH: stands for flashbang. Commonly used by both sides. Flash deals no damage but it’s very powerful grenade if thrown correctly. Once it popped, a white screen will appear on the hit players, and they will also cover their faces. However, you can flash your teammates and yourself, so beware. Furthermore, the closer you throw the flashbang to someone’s face, the longer the white effect will last.

SMOKE: stands for the smoke grenade. A common grenade used by both sides to block off view for a 12 second period.

HE: commonly known as frag grenade. It explodes after 2 seconds dealing damage to everyone around it.

NADE: does not have a specific meaning. Usually, people use it once they are asking someone if they have any grenades left to use.

HERO AK: the term used when one player buys a gun while the other team members only half buy or eco rush. This player is then usually the one on whom the team relies to make the most kills in the round.

PUSH: order to advance to a certain point on the map. Commonly associated with term rush.

RUSH: fast play towards a certain bombsite, in order to get a bomb planted. Mostly used by Terrorists.

BUY: common term for both sides. Simply, it means to buy rifles and/or AWP.

ECO: stands for saving money in order to buy better weapons next round. This strategy is used by both sides. Mostly, on an eco round, players will stick with default pistols.

GLASSCANNON: a person who decides to buy an AWP without kevlar.

EXECUTE: throwing nades to certain places on the map in order to gain control. Usually, Terrorists do different executes, either for mid control, or even to get a bomb planted on the bombsite.

BOOST: Jumping on top of your teammate in order to get a height advantage on your enemies. Boost is commonly used to catch your opponents off guard.

ROTATION: a call to move from the position you were either defending or attacking.

BACKSTAB: when a player kills another player from behind.

BAIT: when a player does an incredibly risky maneuver to draw fire from the enemy team, so his or her team can spot the enemy and counter-attack.

CLUTCH: when a player manages to win while being in an extremely difficult situation.

BHOP: signifies the bunny hop, which is a skilled move that players use to traverse the map faster.

JIGGLE PEEK: a pro move players use to quickly take a peek around a wall to draw fire and see where the enemy is. It’s done by quickly alternating between the left and right mouse buttons.

AWP: the sniper rifle some like to call the big green gun. Very expensive, but very lethal. Usually takes only one bullet to kill an opponent.

DEAGLE: the most powerful pistol in the game. It kills the opponent regardless if he invested in a helmet or not.

POP FLASH: one of the terms used for a flashbang grenade that blinds players who are in range when it explodes.