MOBAs have a very simple base: team games on a map with three lanes. Although it is a bit more complex than that, the basic concepts of what is a game in any game of this genre are easy to understand and assimilate. Of course, mastering them is another story.

Dota 2 is one of the most successful eSports titles with millions of followers and players a like. Dota 2 is a free video game of the genre RTS (Real Time Action Strategy) also known as MOBA (Multiplayer Online Battle Arena) distributed by Valve’s Steam platform.

The origin of Dota 2 goes back to StarCraft, specifically Aeon of Strife (AoS), a custom map and the first MOBA of all. Subsequently, with the release of Warcraft III and as a modification of it, “Defense of the Ancients” (DOTA) was created by the users of the game. Among them IceFrog, while his partner Guinsoo decided to take another path with the successful game League of Legends.

Dota 2 is rated amongst the hardest games in the world. Since no individual or team can master it. The Valve title has host millions of players. The game has attracted the attention of some big organizers that have hosted the competitions with prize pools in millions.

The gameplay of Dota 2 consists of so many mechanics that can’t be mastered by any single player. It makes the game quite challenging and engaging at the same time.

What is Jungling in Dota 2?

One of the practices in Dota 2 that has been almost completely removed by Valve is Jungling. The very concept of Dota 2 Jungling is to farm gold from the creep camps that are distributed across the map. Usually, the practice of farming gold is to go into the lane and get as many last hits on the creeps as possible. But Jungling is an alternative way to get hold and experience by simply killing of the creeps. 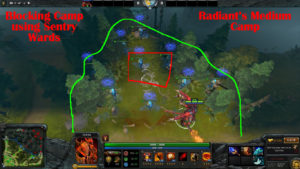 Jungling was one of the best choices for the new players to simply farm passively. However, it had its benefits and flaws. Let’s have a look at the benefits:

Having a jungler ensures a large amount of farm and the ability to make a gank by surprise to help in the other lanes, and accommodating more gold and experience. Jungling was one of the easiest and most used mechanics in lower-tier games. One can simply lose the lane but get the farm and experience while jungling.

Back in the old days, you could buy Iron Talon and Poor Man’s Shield which can simply get so much done for you in such a small time. However, Jungling had its fair share of flaws:

The jungler usually first picks heroes like Legion Commander, Nature’s Prophet etc which put your allies to a disadvantage since the enemy knows the offlaner will be alone and they apply the trilane tactic. In lower tier games the jungler usually remains in the games for 15 minutes and farms blindly without having no awareness whatsoever of what going on in the other lanes. The Jungling practice ruins the true essence of taking last hits on creeps and many players criticized Valve for presenting The Iron Talon.

Heroes lost their credibility after Jungle was nerfed. Back in the Dota 2 jungling days some heroes were quite popular and had an impressive pick rate.

Ursa was an excellent hero to do jungle with his “Fury Swipes” that increase the amount of damage that is inflicted with consecutive attacks. Lifestealer was another solid option, as it can heal itself with “Feast” to stay in the jungle much longer than other heroes.

On the other hand, Enigma and Nature’s Prophet were very good alternatives for jungling because of their ability to summon allied creatures. Enchantress and Chen can turn neutral creeps into allies. Compared to other jungles, these heroes can do the medium and large camps before, as long as they prioritize buying objects that grant mana regeneration.

Axe and Sven were very simple heroes who do not need excessive farm to be useful in the first stages of the game and can also be considered good for the jungle. Both had the skills that gave them armor and damage in the area to perform this task. The Call of the Berserker and the Spiral Counterattack helix of Axe, and Great Cleave of Sven helped to be some of the most impressive heroes of the game. Although they require more regeneration objects at the beginning.

But almost all of these heroes lost their credibility when Valve nerfed Dota 2 jungling. Sven, Chen, and Lifestealer had their pick rate completely declined and to date have not recovered to date. The Jungle Legion Commander is nowhere to be seen. While Ursa, Axe, and Enigma after a decline rate have somewhat made their way back to the current meta.

The practice to go jungle has been completely discouraged by Valve with time. Back in the day, Dota 2 had items that could make your life easier for jungling like the Iron Talon and Poor Man’s Shield.

The Iron Talon did so much for you in such a short time. Usually, in Dota 2 there are only a handful of Heroes that can usually play the jungle role. However, with the Iron Talon, you can simply buy the item on any hero and blindly farm the jungle.

In our opinion, we believe that these items were removed to bring back the offlaners in the game. The Iron Talon made an exceptional difference to the offlane heroes, especially the likes of Legion Commander, Tidehunter and Faceless Void.

In those days, it was seen countless times, that if your offlaner gets beaten, he/she can simply invest 500 gold in Dota 2 Junglers and farm the camps. The item had both passive and active use. Passively it increased your damage output. While When it’s active removed 40% health of the non-hero unit. Statistically, this is not such an impressive item, but when the offlane is pushed towards the enemy tower then with the Iron Talon one can simply go to the jungle and get the much-needed experience.

While the defensive capabilities of Poor Man’s shield proved much powerful for the laning. The Melee carries like Anti Mage were unable to be harassed in the lane and continue to farm since the damage dealt to the hero was a lot less. The item not only discouraged supports and offlaners but also like Iron Talon made farm easy for all the carries.

Do we Need Dota 2 Jungle Meta Back?

The answer is simple, No. We do not need this meta and it is highly unlikely that Valve will bring it back. For the former argument, the game is quite interesting since there is no passive way to farm in the game anymore. The players have to improve their style of play to get the farm by the old and reliable last hitting technique. We can still farm in the jungle at the later stages, but it is when the game is focused a lot on team fights, and not many care about kills the jungle creeps. The toxicity level of the game has somewhat reduced with the end of Jungle Legion Commander and Nature’s Prophet. No one really needs the jungle style of play and it is great to see Valve seeing this way.

Looking at the later argument that Valve will not bring it back is a valid argument, the signs of which can be seen in the recent 7.20 update. In the update, they removed Ring of Aquila which was very much like the Iron Talon and Poor’s Man Shield. It was being made on every hero to ease the laning phase. The Ring was also useful in the mid-game, however, seeing its popularity and its passive benefits, Valve deleted the item. So, removing the Ring along with the Talon and the Shield was a wise choice when it comes to bringing balance to the game. They have even reworked heroes like Sven to be played as more of supporting role rather than a passively farming carry and have even turned Chen into a lane Support.

Before the patch was yet to arrive Dota 2 community assumed that it is time for Valve to go back to focus on the jungle. However, when the patch hit Valve made sure that they remove the slightest idea of returning the early Dota 2 jungle meta.

Seeing iceFrog deleting these items should alarm the community that the developer can even remove heroes from the game.

We might see the meta return in the coming years since one way or the other because Valve will continue to change the game and there will come a time when we will see the early game jungle returning to its former glory.

Of course, there are some heroes that performing better than the others. We have sum them up in a top 10 list as you can see below.